We learn from the past and having learned, apply it to the future. With that, I start with a book about the history of facilities (hidden in the design and construction process) and end with a book about managing people.

The rapid growth of the United States, and the Western world for that matter, was largely due to the industrial revolution and the application of the knowledge gained from it to tame the land. The time from the Revolutionary War and the completion of the transcontinental railroad onward was extremely dynamic. While there were many people taking part in the expansion of the nation, some had greater impact on subsequent generations than others. 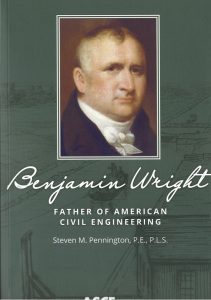 While from a political perspective the nation was founded under the principles of The Enlightenment, principles of rational thinking were required to manage the physical world. These two principles intersected in North America as the nation grew. The need to move goods between the heartland (where crops were cultivated) and the coast (where trade with cities and foreign nations occurred) created a demand for effective transportation systems. Horse and wagon were inadequate to transport large quantities of good, and better methods were needed. There were efficient systems to move goods via oceans and rivers, but mountains limited transportation to the west.

Leaders in several states, including New York, envisioned a way to reach west to the Great Lakes but needed the expertise of technical people, either engineers educated in Europe or locally educated surveyors. Arising to meet this need were several men, and the most notable was Benjamin Wright. The son of a tradesman who learned surveying and law from his uncle, Wright was assigned to manage development of the eastern third of the Erie Canal and ultimately managed the entire project. The success of the canal, completed in 1824, helped drive demand for other canals down the East Coast from Pennsylvania to Virginia, and Wright was called on to provide his expertise for these as well. In the process, he negotiated several conflicts between businessmen, landowners, politicians, and others. He also leveraged his skills to help formulate the profession of civil engineering.

The book provides an interesting perspective to parts of the American Revolution and the early development of the nation. It offers a unique perspective on American history, including the social and political issues that both interfered and assisted with the development of technological innovations.

Lovers of history will find the book enjoyable with its details and many footnotes. Lovers of engineering and technical areas will enjoy a perspective that is not frequently covered in traditional texts. 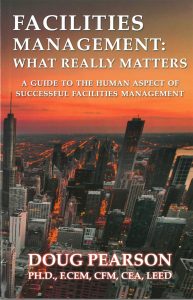 Management of people is frequently difficult for facility managers. Buildings and building systems operate in generally predictable ways when taken care of correctly. One likes to think people will be the same, but there are always differences. In Facilities Management: What Really Matters, Doug Pearson combines his years of experience managing facilities in nine easily read chapters that describe best practices for managing the human aspect of facilities.

The book’s chapter topics move from basic human needs up to customer service, outlining the best practices and giving the supporting theory behind these practices. Each chapter concludes with a brief quiz on the important elements covered, to help reinforce the concepts presented. Several chapters also offer evaluation tools that help organize recommendations for evaluating or developing employees. In addition, tables are provided that identify important customer service mistakes (to avoid) and body language cues when working with customers.

After the text, there are 61 pages of presentation materials that can be used for quick review or reference and may also be used in a classroom setting. The material in Facilities Management: What Really Matters pairs well with APPA’s Leadership Academy. It is not a substitute for the Academy but may be a helpful reference for employees who have attended the Academy programs. It also is a good stand-alone book for someone looking to improve their employee management skills.

Ted Weidner is an associate professor at Purdue University and consults on facilities management issues primarily for educational organizations. He can be reached at tjweidne@purdue.edu. If you would like to write a book review, please contact Ted directly.