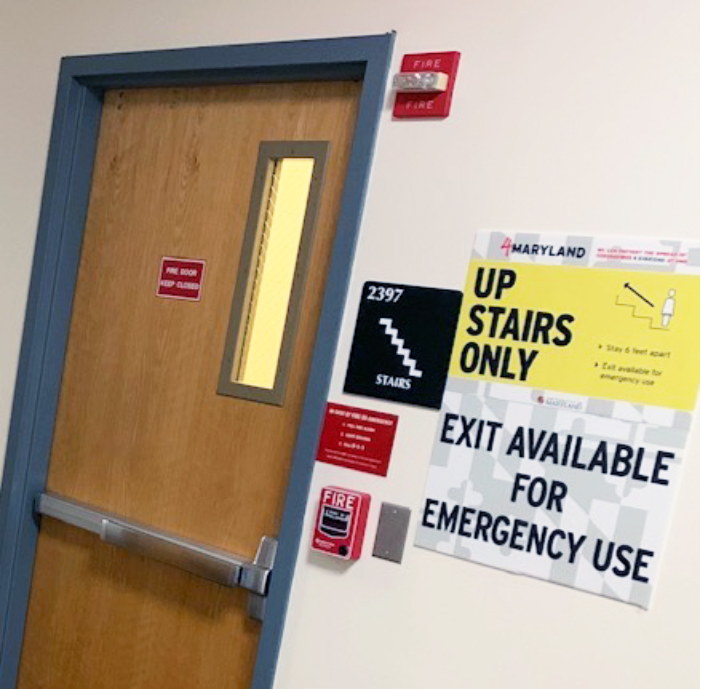 Looking back over all the challenges from COVID-19 that we dealt with in our facilities over the last year, I wonder how many of us, other than those who manage fire safety, think about the role of fire codes? Fire and life safety codes were utilized in the strategies for managing the threats from COVID-19. It was also necessary to balance code compliance with the risks presented by the pandemic. Discussed below are three of the main areas of impact: maximum occupant capacities, alcohol-based hand sanitizer dispensers, and egress and one-way directional signs.

A major component of managing the threat of COVID-19 has been de-densification for physical distancing. Jurisdictions limited the number of people that could be in an occupancy, often by reducing the percentage of the maximum occupant capacity. Capacities, in most cases, are established based on fire and life safety codes. Prince George’s County, Maryland, executive orders on the local state of emergency defined maximum occupant capacity as the “maximum occupancy load under the applicable fire code, as set forth on the certificate issued for the establishment by a local fire code official.” Where no such certificate was issued, the orders prescribed that the maximum occupancy “is as determined by applicable laws, regulations, and permits.”

At many campuses, such as the University of Maryland, the fire code official was called upon to assist with determining COVID-19 capacities because of their familiarity with maximum occupancy load. In some cases, a square-footage factor (i.e., 56 sq. ft./person) was used to calculate COVID-19 capacities. Fire code officials were also called upon in these cases, as they routinely work with fire and life safety code occupancy calculations as prescribed in codes such as the NFPA 101: Life Safety Code.

Sanitizing hands and surfaces was another major component of managing the COVID-19 threat. Alcohol-based hand sanitizer, a flammable liquid, was a commodity in high demand during the onset and through the peak of the pandemic. Facilities management organizations had difficulty obtaining the product from suppliers. In most cases that meant taking what was available. Dispensers that conformed with codes, often wall-mounted, were in short supply or unavailable. The predominant products that suppliers could provide were 1-gal. containers with pumps that could be placed on stands—a quick, low-tech (no batteries required), and less labor-intensive installation. But the gallon containers have a much greater fluid capacity than allowed by most codes for individual dispensers.

The NFPA 101 general criteria for nonaerosol, alcohol-based hand-rub dispensers are .32 gal. in corridors and .53 gal. in rooms or suites separated from corridors. A maximum of 10 gal. is permitted per floor outside of individual rooms, with 5 gal. permitted to be stored per floor. The most efficient location for the dispensers is in public areas near stairs, elevators, exits, and other high-traffic areas. Large floors could easily have a need for more than 10 dispensers. A stock of alcohol-based hand sanitizer may need to be stored elsewhere. In a perfect world, the additional stock would be stored on each floor, but it is more likely that it is stored in a common storage room or a warehouse where it might exceed the maximum allowable quantities for flammable liquids.

Another significant component of managing the threat of COVID-19 was having occupants walk through buildings in one direction so they would not pass each other. This became a challenge for emergency egress. Occupants had the need to access the nearest exit in case of an emergency—a primary principle of life safety codes. Directional signage was installed that often took people on circuitous routes through the building to reach an exit when there was one closer in the other direction (also a problem for getting to restrooms). Stairwells became either up or down. Exits became in only or out only. Walls, doors, and even floors became covered with signs, many of them violating the fire code by providing messages that confused the purpose of exits.

Keeping occupants from using the closest exit was not intended. However, it was necessary for fire safety managers to find ways to make sure egress was not overlooked. Circulation plans prepared by facilities planners could be reviewed where available, although it was most important to provide an emergency egress message that would not be lost in a sea of signs. Ironically, it usually meant either more signs or modification of COVID-19 directional signs to indicate that exits and stairs were always available for emergency use—an easier task to accomplish with an in-house facilities management sign shop.

Messaging on egress needed to be included when communicating COVID-19 building safety measures. Some egress-related issues were difficult to adequately address with messaging alone and needed corrective action. Where occupants were blocking open fire doors to avoid touching hardware, the fire doors had to be closed. Devices installed by occupants on door handles, allowing them to be opened with an elbow, violated the fire code and defeated the Americans with Disabilities Act (ADA)-compliant designs and needed to be removed.

Alan Sactor is assistant director and fire marshal at the University of Maryland, Department of Environmental Safety, Sustainability and Risk in College Park, MD. He is also the risk vice-president at the Center for Campus Fire Safety and serves on APPA’s Standards and Codes Council. He can be reached at asactor@umd.edu.