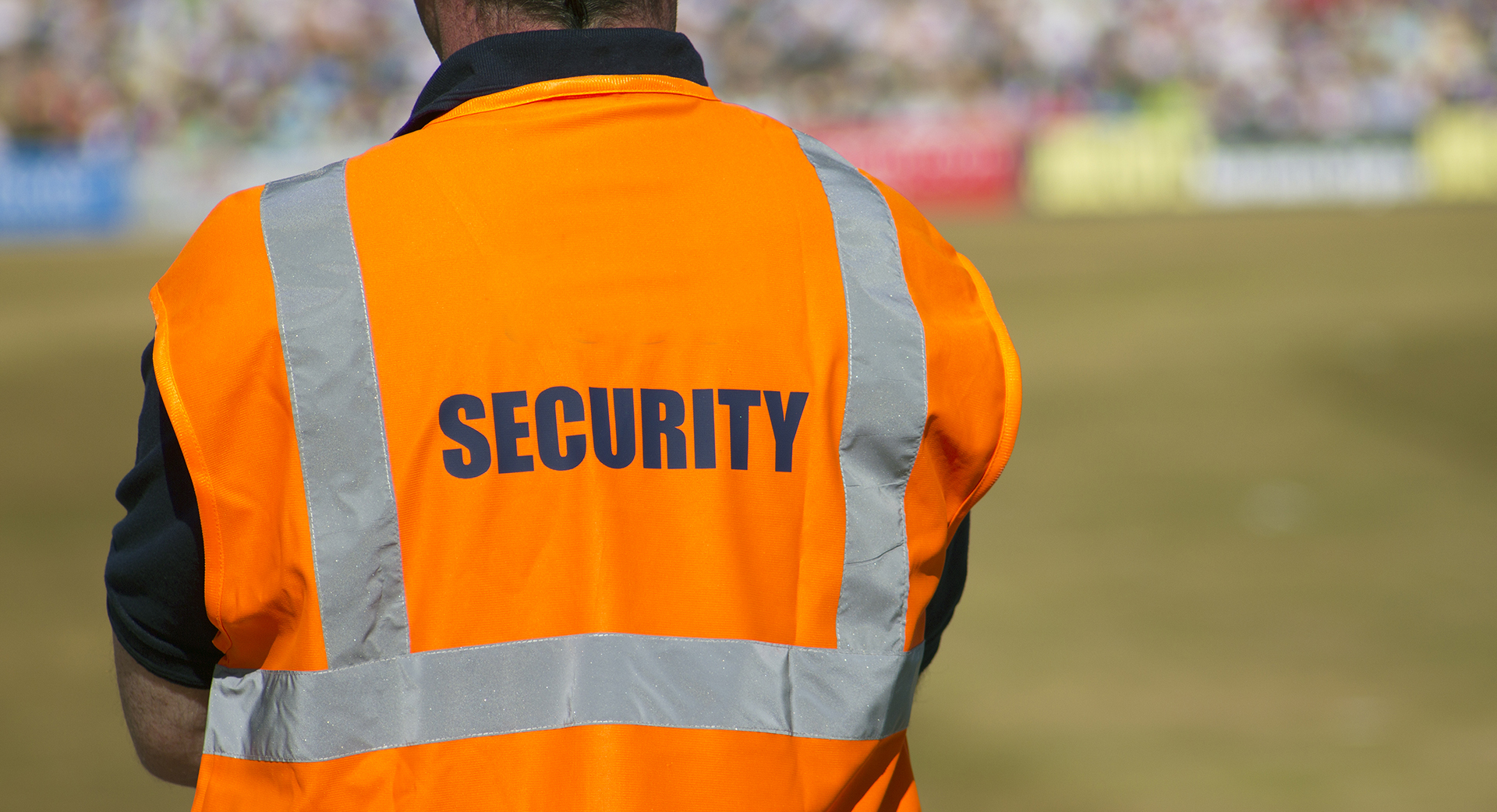 An athletic facility manager who perceives a risk management strategy to be effective is essentially expressing that it works. Perceptions of effectiveness may be influenced by common sense, experience and best practices, understanding patterns of human behavior, or recognizing threats. Whereas a lack of perceived effectiveness indicates that a strategy does not work, at least not every time. Most people in this study, especially those from D-II, believe that their strategies work. The most frequent successful strategies are as follows: for D-I, the use of a central command to coordinate security responses; for D-II, restricting critical areas; and for D-III, having a written risk management plan.

Across all divisions, the following strategies seem to work: having a risk management plan, using a central command to coordinate security responses, and having a minimum of one security personnel for every 250 spectators. Other effective strategies are live security patrols, use of visual inspection of spectators upon entry, having an ambulance and/or paramedic onsite, and having an athletic trainer and/or medical doctor onsite.

Nonetheless, what is most compelling are the explanations of why athletic facility managers believe a strategy to work. For instance, one facility manager indicated that having a risk management plan is effective because “we have had an ‘active shooter’ near campus and our [lockdown] procedures ensured anyone in our facilities were safe until local law enforcement gave an all clear.”

Several comments indicated that live security patrols catch people trying to sneak into games, break into patron vehicles, and use alcohol. Additionally, medical personnel onsite help to improve the response time and reduce severity of injuries; the benefit of this measure was described by one respondent: “We had a full cardiac arrest … and the patient was breathing when he left.” Another respondent indicated medical personnel are “excellent in reducing pain, injury, [and] suffering that could lead to legal action.” Other athletic facility managers presumed risk management strategies to be effective, suggesting that a lack of incidents indicate the strategies are working to deter risk.

Respondents made other significant comments about what strategies work:

Yet the one strategy whose effectiveness (or lack thereof) was not addressed by any respondent is that of restricting backpacks and other large bags carried in by spectators. This silence is especially surprising, since a majority of D-I respondents use this strategy.

Respondents made the following significant comments about what strategies do not work:

This study examines NCAA athletic facility managers’ perception of effectiveness of their risk management strategies. In a survey, 113 athletic facility managers across all three NCAA divisions reported their use of 34 risk management strategies as recommended by Pantera et al. (2003). However, inconsistent with Pantera et al., the only risk management strategy used by all respondents is having “an athletic trainer or medical doctor onsite.” For those strategies that are used, many are perceived as effective, such as “having a central command to coordinate security responses,” while others may occasionally lack perceived effectiveness, such as “signage detailing security practices and restricted items.”

Athletic facility managers can use the results of this study to compare perceptions of effective risk management strategies used at other institutions. These findings may also be relevant to managing other campus facilities, particularly those that accommodate large groups and support large events. This may, in turn, help prevent legal liability, reduce costs of litigation, avoid reputational harm, and make communities safer. 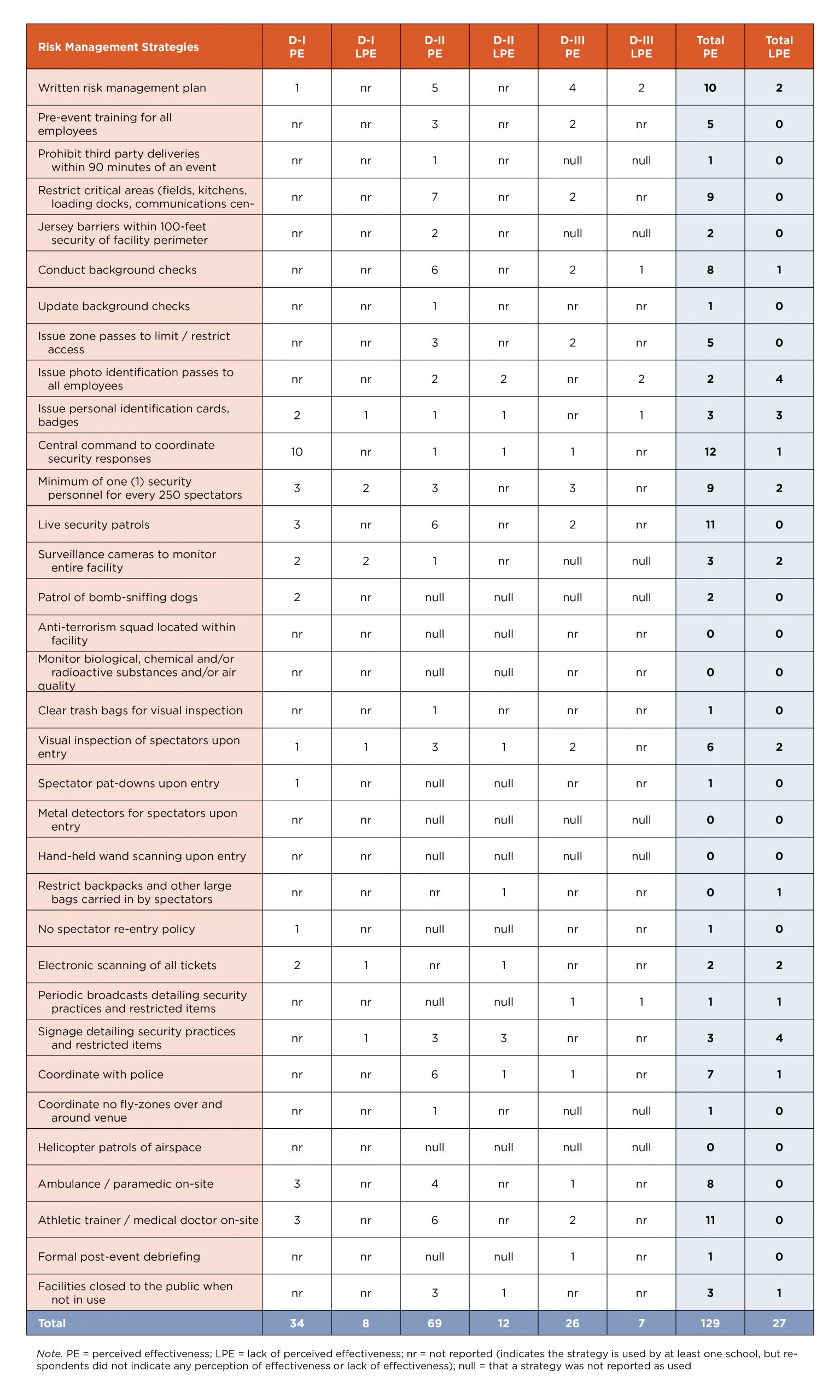 Angela Hayslett is a lecturer at James Madison University, Harrisonburg, VA, and can be reached at haysleai@jmu.edu. Emeka Anaza is an associate professor at JMU and can be reached at anazaea@jmu.edu. This article summarizes the authors’ research project CFaR042-20, conducted under the auspices of APPA’s Center for Facilities Research. Read the complete research report here.