The construction industry is enduring its most significant challenges in a generation. Escalating costs and supply chain issues are crippling timelines and siphoning cash flow from carefully detailed capital improvement plans. As the industry continues to wrestle with these realities, it might do well to look at a promising alternative. A recent Fast Company article (Elissaveta M. Brandon, December 2021) heralds the adaptive reuse movement and poses a new angle of consideration: “What if we didn’t build any new buildings for a year?”

Though Brandon’s point seems more a means to explore the environmental benefits of development restraint, the embedded financial comparison of new construction versus repurposing is equally compelling. Regardless of which catalyst is most recent, with new construction facing myriad unexpected challenges, the notion of adaptive reuse is resurfacing with renewed interest. The appeal is particularly attractive in the institutional setting, where adaptive reuse is emerging in many inspired permutations due to limited space and nearly unavailable resources.

Despite this resurgence, such ambitions are not without their pitfalls, as impediments arise in many forms. Successful acquisition and development of assets—or adaptation and refinement of buildings at the campus level—is often challenged by the ever-changing political, environmental, societal, and technological landscapes. Initiating programmatic change requires navigating the ever-changing wants and needs of the user. Meanwhile, both users and usage can vary widely from students, faculty, and researchers to patients, artists, conservators, and librarians.

Space allocation poses an additional impediment to the status quo. Since it is no longer acceptable, sustainable, or even practical to merely buy more land and build, finding the right spaces—or simply locating space—to implement desired improvements is increasingly difficult. Amidst clouds of uncertainty, the silver lining of an adaptive mindset places new options on the horizon, fueled by imagination and reinforced by creative engineering.

For select established and functional assets, vision and foresight are required to predict the next successful iteration of use. One such instance occurred at the renowned University of Notre Dame, whose campus is filled with architecturally cherished facilities. Aside from the famed Golden Dome itself, few buildings hold as much iconic stature as the Hesburgh Library. The highlight of its celebrated aesthetic is The Word of Life, a tiled mosaic of Christ that offers an artistic commentary on the intersection of faith and knowledge. The commissioned piece adorns the south facade and overlooks the nearby football stadium, helping the art to earn its better-known nickname, “Touchdown Jesus.” Despite its recognizable exterior, the extensive library collection and hallowed interior halls are of equal importance, revered by students, faculty, and alumni. Even so, Notre Dame leadership understood that Hesburgh needed a change from within. 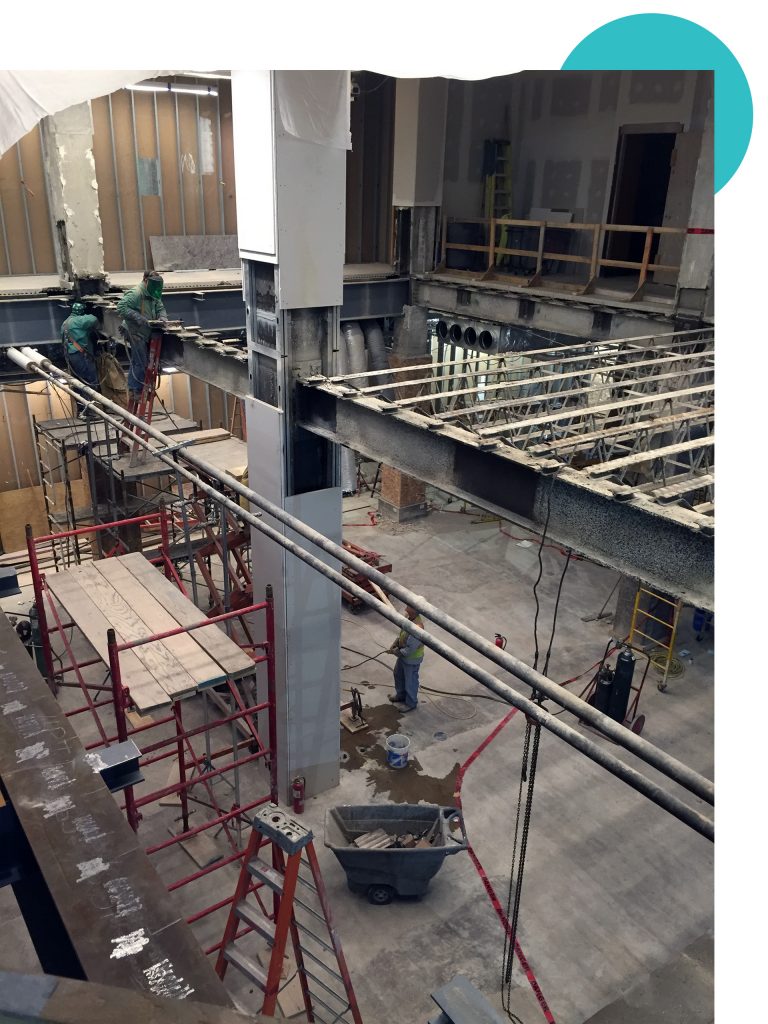 The main area of the Notre Dame library captured mid-construction, with the floor being removed to create the connected open space between levels. Photo courtesy of Miller Davis Company.

Envisioning and then accepting change is never easy, especially when the subject building is currently functional. Revitalization of Hesburgh Library required a preservation mentality bolstered by the courage to adapt and meet the changing needs of the student population. In order to tackle a programmatic facelift, leadership reimagined a multitiered transformation. The vibrant new main space embraces the collaborative philosophy of today’s students and encourages more connection and intellectual engagement. Furthering the sense of community, the renovations created various “neighborhoods” of related services between a multitude of previously segregated levels.

An enhanced area dubbed “Technology Row” was added to advance the facility beyond a heralded physical library collection to a modern academic research facility. The improved digital access and new resources help to serve an evolving research landscape. Though impactful, the programming and tech upgrades went beyond new hardware and retirement of the classic wooden study carrels. Significant structural and architectural design changes were required to achieve this vision. Not only would the service offerings be altered, but the look and feel of the space would dramatically change. This decision further challenged the status quo and threatened to upset decades of sentiment and nostalgia.

The final hurdle was logistical: keeping the library open and functioning while enduring extended inconvenience during renovation. The work progressed while the students used the library, evolving through four renovation phases with each phase compartmentalized into small construction sites of 3,000 to 5,000 sq. ft. As the heartache of sentiment and renovation fatigue gave way to a celebration of rebirth, the construction partitions came down to yield spectacular new spaces where students and faculty could gather, collaborate, and conduct research. The institutional dedication to change, the mindful process throughout, and the final outcomes expressed a steadfast adherence to and rekindling of the library’s stated mission: “to connect people to knowledge across time and space.” During the entire journey, the exterior of an iconic asset was preserved while a metamorphosis took shape within.

More traditionally held perceptions of asset revitalization often include acquisition of blighted or functionally obsolete structures. In such cases, breathing new life into a structure requires having the foresight to peer past cobwebs and dated and damaged finishes, and sometimes envisioning walls and floors to be added, removed, or repositioned. While some vibrant communities always seem ripe for visionary change, other locales require a longer “fermentation” period to prepare for their evolution. The City of Muskegon, Michigan, has been steadily evolving for just that type of revitalization. Having emerged in the late 1800s as a lumber stronghold, the port city later transitioned its primary industries to paper, automotive parts, tools, machinery, and chemicals. After peaking around WWII, Muskegon began a decades-long economic devolution, with investment shifting away from the downtown corridor. Paralleling the city’s rise to prominence, Muskegon Community College (MCC) emerged as a local institution and garnered a rich history of postsecondary education in the region.

The college was established in 1926 at Muskegon High School, and its early growth required expansion into the Hackley Administration building, just east of the downtown Hackley Park. As Muskegon departed from its downtown core, additional space needs pushed the college to relocate again in the mid-1960s, this time north to the Orchard View neighborhood. Over the next six decades, enrollment swelled, the program flourished, and the campus grew to comprise a large collection of diverse facilities.

At the dawning of the new millennium, Muskegon awoke from its postindustrial slumber; urban living fell back into favor; and microbreweries, restaurants, and housing options began to dot the downtown landscape. MCC sought their own revitalization and began searching for the appropriate venue to serve the downtown resurgence. The shuttered Muskegon Chronicle building, home of the local periodical until it closed in 2012, arose as a possibility; it was historically significant and uniquely adorned, but functionally obsolete.

The vacancy paved the way for the new vision of MCC—a technology education hub known as the Carolyn I. and Peter Sturrus Technology Center (STC). Within the STC, the college would relocate and update their electronics, welding, machining, tooling, and foundry programs while adding new computer-aided design (CAD) and 3D printing capabilities. MCC leadership embraced a vision to adopt the vacant Chronicle facility and reestablish a downtown presence, and embarked on a bold transformation plan for the site facing Hackley Park—fittingly, only a block west of the 1930s location of the original college. 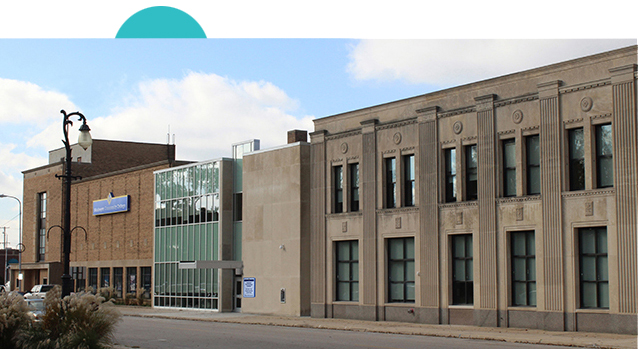 In addition to obsolescence, the Chronicle building presented many unique difficulties. Former press rooms presented the first impediments. As circulation grew, the multistory printing presses were relocated within the building numerous times, leaving atrium-esque spaces with no intermediate floors in one area and a multilevel patchwork of miscellaneous structural systems in two others. These conditions required adding floors and extensive structural reinforcement. Programming demands fueled another set of obstacles.

Since the existing building featured a full basement, and MCC desired to put a metal production shop on the first floor, a structural design consultant was required to develop a customized reinforcement plan to accommodate steel material storage, the dynamic loading and vibrations of a cutting shear, and unlimited access for a forklift within the space of an elevated slab. Adding walls and floors, enclosing new classrooms and bathrooms, and generally accommodating an increased number of occupants also required major updates to the mechanical, electrical, and plumbing systems throughout the building.

Retiring the Chronicle building in 2012 initiated job losses and community mourning for a cherished period of history. MCC’s vision and investment adopted the building and allowed the Sturrus Technology Center to be born. Despite the various challenges during the design and renovation process, the final result is nothing short of stunning. The storied structure has roared back to life and relevance, serving people in the heart of downtown and moving Muskegon another step forward. 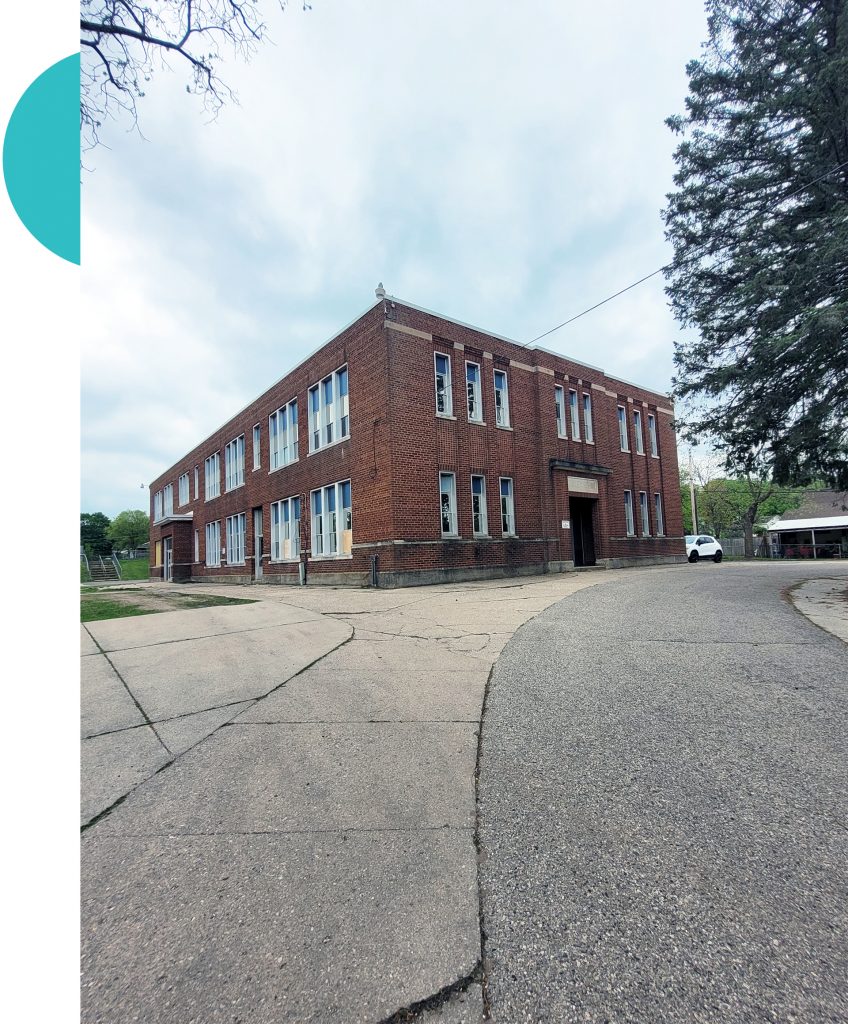 In some cases, facility assets no longer meet the current needs of the owner. After years in a perpetual state of “mothballing,” if buildings aren’t poised for internal reuse, considerations often sway toward selling or demolition. Yet, when underutilized structures still hold historic community significance and a potential for future use, creative asset curation can invite new opportunities and third-party participants.

One such example is found in the northern Michigan community of Cadillac. Historically a remote logging settlement made accessible due to railroad expansion, Cadillac still serves as the seat of Wexford County and now boasts itself as an all-season recreation destination featuring fishing, boating, hunting, hiking, biking, snowmobiling, and downhill skiing.

In the late 2010s, the Cadillac Area Public Schools (CAPS) system recognized the evolution of their functional programming needs had outgrown the capabilities of a 21,000-sq. ft. alternative high school building. Instead of demolishing the historic two-story brick masonry structure and a newer 4,600-sq.-ft. addition, the district decided to give new life to the facility and packaged the three-acre site into a unique development opportunity. In partnership with the City of Cadillac, CAPS focused the opportunity on preservation of the historic context of the school structure. With this objective, the team created a new mixed-housing concept to best fit the surrounding neighborhood and included a community park to utilize the existing athletic fields and adjacent green space. In order to further entice prospective partners, CAPS proactively conducted community forums for public feedback and developed preferred concepts and features but remained open to alternative investor ideas.

Going beyond historic preservation, the concept sought to benefit the school district with direct capital recovery from the sale, enhance the surrounding neighborhood with increased housing and improved community amenities, and strengthen the greater Cadillac area with an increase of the tax base along with potential job creation. Though the end of this development story remains unwritten, it serves as an encouragement to others who may be underfunded or whose needs no longer align with their current asset inventory. Reuse can take different forms, and in some cases might mean releasing a structure to its next owner and next iteration of functionality.

As we collectively seek to positively impact the educational environment, we remain focused on adapting, enhancing, and transforming the facilities of the future. We can sharpen that focus by implementing various new approaches. These might include releasing an asset to its next cycle of community service, rescuing a suffering facility with a breath of new life, or retrofitting a functional building for its next season of use. Revisiting the question raised by the Fast Company article referenced earlier, a year without any construction may seem untenable, but the undercurrent of the concept gives momentum to many reuse considerations.

Ross Smith is a principal-level structural engineer with Wiss, Janney, Elstner Associates, based in Grand Rapids, MI, and can be reached at rsmith@wje.com. This is his first article for Facilities Manager. Thanks to Don Minner for his assistance.